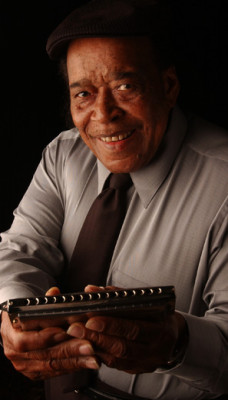 The Rosebud Agency proudly welcomes GRAMMY Award winning Blues legend and harmonica master, James Cotton, for exclusive worldwide booking representation. Cotton has recorded almost thirty solo albums throughout his career. His long list of awards and accolades includes being inducted into the Blues Hall of Fame, a GRAMMY win, four GRAMMY nominations, seven Blues Music Awards, and the addition of one of his own harmonicas to the Smithsonian Institution’s permanent collection. Cotton has performed and collaborated with Blues giants including Sonny Boy Williamson (who he learned harmonica from as a small boy), Howlin’ Wolf, B.B. King, Freddie King and Muddy Waters (a Rosebud artist until his passing). In fact, he stayed by Muddy’s side for over a decade and became the leader of his backing band during that time. Cotton has also shared the stage with rock greats including Janis Joplin, Led Zeppelin, The Grateful Dead, Santana, Steve Miller and many others.

Cotton grew up on a cotton plantation and, as a very small boy, he received a fifteen-cent harmonica for Christmas and mastered it almost immediately. He began listening to Sonny Boy Williamson’s King Biscuit Time and learned to imitate the older bluesman note for note. In 1944, after both of Cotton’s parents had passed away, his uncle took the nine-year-old to meet Williamson. Cotton’s talent amazed Williamson, who took the youngster under his wing. He spent many nights traveling with Williamson to juke joints all over the area; often playing for tips outside, he sometimes drew crowds to rival Williamson’s. When Williamson left for Milwaukee in 1950, Cotton, then fifteen, took over his band. Over the course of the next fifteen years Cotton joined Howlin’ Wolf’s band and toured with him all over the South, cut a record for Sun Records which included the classic "Cotton Crop Blues", and joined Muddy Waters’ band. By 1966, Cotton was ready to head out on his own and since has become, as stated by the Chicago Tribune, "a key link on the chain of great Blues harmonica players…".