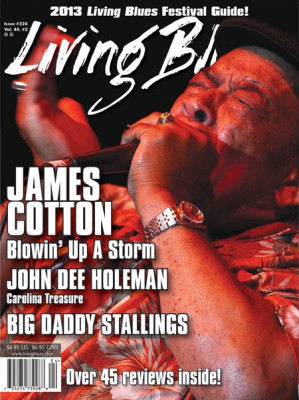 Harmonica legend and Rosebud’s most recent signing, James Cotton, is featured on the cover of the April issue of Living Blues Magazine. The in-depth cover story and interview takes a thorough look at Cotton’s life. Starting from his humble beginnings as the ninth child of a rural Mississippi sharecropper family, the article recounts Cotton’s legendary meeting with Sonny Boy Williamson (II) at the age of nine. This meeting, where the young Cotton performed the theme song to Williamson’s radio show note-for-note, led to Williamson’s mentorship of Cotton for the next six years. The feature also highlights Cotton’s days playing the Memphis Blues scene, recording at Sun Records with Howlin’ Wolf as well as under his own name, plus his twelve year tenure on the road with the late Muddy Waters, a Rosebud artist until his passing. Cotton said of Muddy, "I love Muddy… I loved every minute of it. If I had to do it all over again, I’d be glad to do it… I watched him for 12 years and noticed everything he did." The article then covers Cotton starting his own Blues band in Chicago, where he secured their first gig with help from Paul Butterfield and Rosebud artist, Elvin Bishop. Touring constantly and performing with acts such as Janis Joplin, Led Zeppelin, The Grateful Dead, Santana, and Steve Miller throughout the next several decades Cotton became, as Rolling Stone proclaimed, "among the greats of all time."

Living Blues notes that Cotton is still dishing out "his legendary multi-octave harmonic prowess (to say nothing of his hurricane-like wind power) with undiminished force" on his new album, Cotton Mouth Man. Set for release on May 7, 2013, the new album features an impressive lineup of guest collaborators including Gregg Allman, Joe Bonamassa, Warren Haynes, Keb Mo, Delbert McClinton, and Rosebud artist, 2013 Grammy-nominated Ruthie Foster. Cotton will be touring worldwide in support of Cotton Mouth Man.